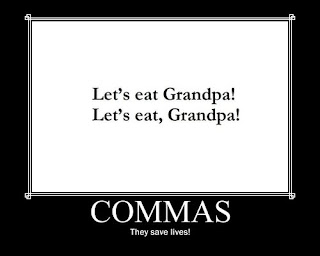 Here's a funny poster I saw on Boing Boing. It reminds me of some signs that you can see around campus where they use quotation marks to imply emphasis, as in:

"No food or drink in the lobby."

Does that mean we're allowed to or not?

A funny example of this is a quote from an acceptance speech: "I would like to thank my parents, Ayn Rand and God."

Another weird thing: I say, "sure" a lot now. I don't know who I picked that up from or why, but I say it in response to the most random sentences.

Commas after the last "and" in a series: yes in the US, no in England.

Don't get me started on mis-used apostrophes!

The completely grammatically correct response, of course, is "surely," as in, "Hey, you want to go get some pizza?" "Surely." Hmmm...sounds stilted...go ahead and stick with "sure" if someone asks you for pizza.

Thanks for a fun post! Right up my alley. :)

Oops, I don't think "misused" is supposed to be hyphenated. Ha ha!!

Yo. The more I learn about English, the more I realize that language is fluid. Many fixed and fast rules are actually not either.
If you want to read a cool book about English, I suggest Alphabet Juice by Roy Blount Jr. (who chooses to not add a comma before the Jr. and writes about it).
Did you know that "partridge" and "feisty" are epistemologically related words but neither palette and palate nor babble and Babel are?

I checked his book out from the library. I listen to him whenever he's on "Wait, wait ... don't tell me." I like him.