When Katie and I were dating, we used to play a card game called Egyptian Ratscrew. I can't really describe it here, but let's just saw that Katie was awesome at it and I was terrible. We played it at least 40 or 50 times, and I think I won only once or twice. That is not an exaggeration.

I was looking on Amazon just a minute for a new game to buy or something, and I came across this game: 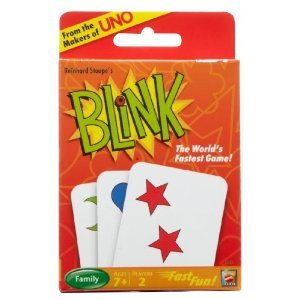 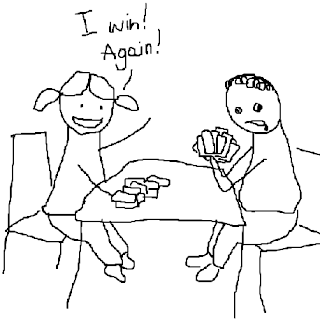 On an interesting side note, I used to get my old zip code in Berlin mixed up with the digits of pi. The zip code was 14195, and I always wanted to write it as 14159 because that seemed to flow better. Okay, okay I admit saying that this side note was interesting was a bit of a stretch, but there you go. 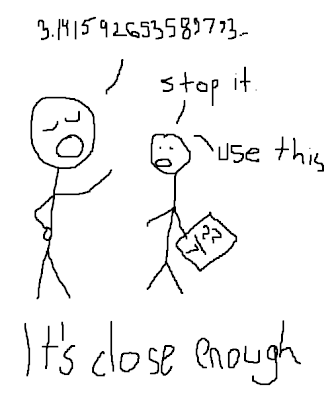 So, I guess I'm not so good at writing every day anymore.

Work has been crazy. Sometimes it has been literally crazy. Like, I've seen some crazy people at work. Last week there was a guy who was getting a hole cut into his iris to relieve some pressure that has built up in his one remaining eye. He was a crazy guy and didn't really understand what was going on. Every time the laser went off that was supposed to blast a hole in his eye, he would scream and jump away. This is bad, because you and easily go blind by looking at that laser directly. The doctor brought me in and my job was to hold him down and push his head up against the laser machine so that he would stop jumping. He was pretty strong, and he was pretty stinky. I had to hold him down for 25 minutes straight. My arms were shaking near the end of the operation and I was repeating over and over again, "Now, sir, you have to stop moving or you'll go blind, OK? Stop moving!" The operation was a success and I was the hero for an hour.

I saw the most disgusting sight I've ever seen today. I can't describe it in detail because it really makes me want to throw up when I think about it, but let's say that it involves an empty eye socket, a lot of pus, and a pencil...

In other news, I found some really neat pictures taken by Zander Olsen. These pictures are from a series called Tree, Line.

My legs are so tired right now. It reminds me of how physically demanding my job was when I worked at the wood mill in Provo. But this time, only my legs are exhausted instead of my entire body. I saw a lot of nasty eye surgeries today. I just stood about 3 feet away from the surgery table, watching the doctor operate on people getting long, droopy eye lids removed and short eye lids extended (using a skin graft from the chest), and a guy getting a cyst removed from his eye. The sights and sounds didn't bother me much, but the smell of cauterized flesh is disgusting. I'm glad that I will just be an optometrist and not a surgeon or something. I don't know--maybe I'll get used to it, but that smell is absolutely haunting.

In a completely unrelated note, did anyone else think that Village Inn is a hotel or something? I did, right up until I went there with my mom and Uncle Tom back in 2007. This was when I was 21, so I really didn't have much of an excuse. They do have good pie, though.

I had my first day of work today. My scrubs worked out OK. A few people asked where I got them and they were genuinely impressed when I told them about the scrubs at the thrift store.


I saw a lot of really interesting patients. I mostly just followed the other techs and the doctors around, but I was able to do a few visual fields. Basically, I sit in a dark room with a stranger and make sure they don't look away from a little tiny light in a box as they try to see flashing lights in their peripheral vision. The test takes about 6 minutes per eye. Old people tend to fall asleep while taking the test and I have to be the one to say, "OK, be sure to keep your eyes nice and wide! Don't get sleepy! Only 4 more minutes to go! You're doing great! Don't look away! Stop looking around! Keep looking at the light in front of you! No, stop looking around!" And other things like that.


I saw a really gross eye today. I try to describe it in as much gruesome (it took me 4 tries to spell that right) detail, so if you're squeamish, skip to the next paragraph. So this older guy came into our office a couple of weeks ago to get one of his eyes taken out. I'm not sure why that needed to happen, but it does happen sometimes if you have things like a super nasty infection or a bad cancer or things like that. Anyway, he came in today because his empty eye socket was completely filled with bloody ... stuff. I walked into his room and screamed in my mind. His eyelid over his eye socket was bulging forward and there was a huge bloody mass underneath it. There was a heavy trickle of blood seeping out of his eye, down on to his cheek. He had a tissue that he would use to keep the blood off his shirt. The craziest part was that he didn't seem to be in any sort of pain. Maybe he was on a lot of pain killers. I don't know. And then, the doctor came in to look at it and was touching it and pulling his eye lid back and things and said, "Oh yeah, this can happen sometimes," in the most casual voice in the world. I was contemplating drawing a picture for you in Paint, but that wouldn't be fair to the squeamish people who skipped this paragraph.


Anyway, because of the heat wave that we were experiencing (luckily it has passed), I was thinking about frying an egg on the sidewalk. I didn't actually do it, but I was curious how hot it needs to be to fry an egg. It turns out that it probably won't ever get hot enough. I found this article on the Library of Congress' website. It says that eggs require a temperature of 158° F to become solid. A hot sidewalk was only found to conduct as much as 145° F. However, it did say you would probably have better luck frying an egg on some blacktop or on the hood of a car. Schmecker lecker!
4 comments:

Katie said she missed reading the things I wrote. I think I also miss writing like I did back in 2010. So I'm planning on writing more often again.

I'm finally starting work tomorrow. I've been waiting for almost an entire month to begin. I'm excited to learn what I'll actually be doing. I imagine myself standing beside an operating table with the surgeons having an open skull in front of them, removing some sort of exotic eye tumor, then they have to go to the bathroom and hand the tools over to me and I save the day. Not really, but that would be cool. No, I'm pretty sure I'll just be in charge of cleaning the equipment after the operations and taking people's blood pressure. I have to wear scrubs at work. I went to the thrift store to pick up some second hand scrubs. There were two pairs that weren't XXXL or had floral prints, so I got those. I put them on and I think I will feel pretty ridiculous wearing pajamas to work. At least I won't be the only one wearing scrubs. 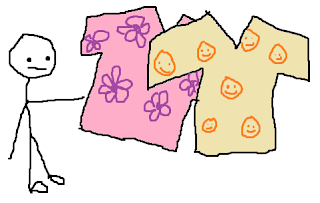