Now for round two. Sorry if you think this is boring, but I do not. So there. Ha! 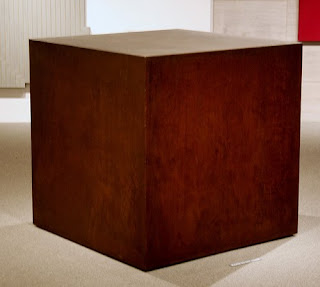 It's called Die and it was made by Tony Smith in 1962.
It's called Die because it's shaped like a die, not because he's telling you to die or something. Just wanted to make that clear. When you look at this I think my first instinct makes me want to say, "Pssh, whatevs. Making that would be so baby cakes." But again, the beauty of abstract art is not the object itself. It's always something deeper.
Artists throughout time have always been in the business of deceiving the viewers. They try to trick us to think that a bunch of pigment smeared on a canvas is a person or a tree or something. They try to make a 2-dimensional object look 3-dimensional.  Is it dishonest? Well, sure, in a way. Minimalist artist were sick of the illusion, the deception. Why not appreciate the art for what it really is? A sculpture made out of metal is really just a twisted hunk of metal. This is the idea the Tony Smith was trying to portray. It lakes any real subject, texture, or symbolism. He wants you to look at his art, and all art for that matter, as an object. This reduces the whole artistic experience down to its most fundamental level. We can't presume anything about its meaning because it has no meaning. The art lies in the idea that you should be completely and literally honest in everything you do.
My only beef with this is that he called it Die, as if it supposed to represent a die. I think it would be a lot more effective if he called it Piece of metal or Cube or something.
I think a better piece of art that shows this idea is this sculpture called Untitled by Donald Judd: 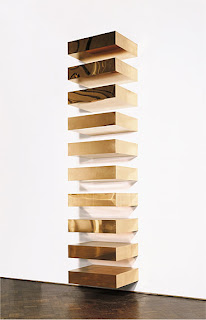 It's not metaphorical or symbolic in any way. Judd just wanted you to view it as an object. On the top and bottom of each rectangular piece of wood is clear Plexiglas so that you can see the interior of each piece, concealing nothing. Absolute honesty. No illusions. His desire was to banish ambiguity and falseness.
I don't necessarily agree with this type of art. I think great ideas are often more effectively portrayed as symbols. Take letters and words, for example. You are seeing a stream of electrons hitting an electro-sensitive screen, but you are interpreting it in your mind as a sentence. I think having objects symbolize something else is a good thing, but I also think that it's good to get new perspectives and understanding. At least now you know why some people this type of minimalist art is really cool.

I like that it's titled "Die," because it makes me think. So much of who I am is tied to machines, and here's this big chunk that could be called "hunk of something" (is it metal? wood?), or "cube," but no, the artist (who says he eschews meaning) invokes meaning by reminding me that everything around me is tied in some way to machines. Although I don't like that (being so tied to machines), I like that (the title).

Huh. I did not know that about minimalist art, being art for arts sake. Very interesting.

Man, I could make that in like five seconds. Easy.