While studying last night, I came across an interesting animal. I was studying the circulatory systems of various animals and came across cnidarians, specifically hydra. They look like this: 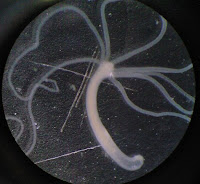 They are teenie-tiny water creatures (meaning only a few millimeters long)  and they can do some pretty amazing things. For one thing, they can regenerate any appendages that are lost. It would be as if someone cut off your arm and then you could grow it back. How awesome would that be? Not that I have ever lost an arm or anything...

However, the most amazing thing about them is that they appear to be biologically immortal. Meaning that they don't age. If left on their own, they could live basically forever ... or so some scientists believe. Being biologically immortal isn't the same as never dieing; they can still die if you squish them or if they get eaten.

Cells tend to die off because they are either programmed to die (called apoptosis) or the DNA becomes riddled with too many mistakes through either faulty copying or outside influences. These things can be prevented by having the right "stuff" in the cell to go back through the DNA and correct the mistakes, which hydra and other things (like cancer cells) apparently have.

I read that a biologically immortal human being would statistically only live to be around 1200 years old before he/she would die from some sort of accident, like being hit by a car. Perhaps this can explain the long lives of Adam and Methuselah? Maybe our cell make-up changed way-back-when so that the repair system didn't work as efficiently, thus reducing our life span.

Can you imagine what life would be like if everyone lived to be over 1000 years old? Henry IV of the Holy Roman Empire, Genghis Khan, and Christopher Columbus would probably be still alive. Well, probably not Genghis Khan. I'm pretty sure he didn't die of natural causes.

I would like it if Shakespeare were still alive.

This is Chris.
Did you hear the Radiolab where they said that genghis Khan has about 16 million living descendants? crazy. Most people (from any culture) from his era have about 800 living descendants, presuming they had average numbers of children.

I did hear that one about Genghis Khan. It makes me wish that I was related to him somehow...

Relax! - Biological Immortality on Earth already is a fact - I can make everybody Immortal in less than a month - We humans can stop aging (by wiping out all diseases) and live forever (like our Creators from the planet of Nibiru - The Anunnaki) - I got the key to our Biological Immortality - By staying absolutely healthy all the time - By doing my discovery (just an exercise for a minute a day) - My WVCD - The Weapon of Virus and Cancer Destruction, that cures and prevents any diseases, known on Earth for millions of years, even radiation disease (concerning space flights) - I will describe my WVCD to everyone, who sends me a check for one million bucks - Everybody will stay absolutely healthy all the time, living their Endless Lives, for Infinite Health = Immortality.